It is no longer news that several lives have been lost to police brutality and terrorism in the society.
It has even become a Norm to hear offensive tales regarding the unfortunate things Nigerian youths are going through in the hands of these men paid to protect them.

Needless why they chose to embark on a peaceful protest that hasn’t totally been peaceful as lots of Protesters have met their doom why protesting for their cries to be heard by their leaders.

In the recent attacks, policemen shot sporadically into the air, thereby killing and injuring some of the protesters.
Just last night, there was a candle night service held in memorial of all the citizens who lost their lives to police brutality and terrorism in the country. 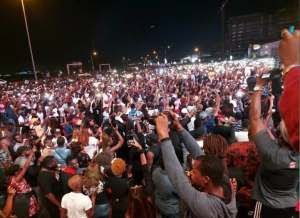 During the candle night, a procession containing the frames of the dead heroes Were seen arranged together, as seen in the videos shown below;

#ENDSARS: Sanwo-Olu reacts to the Candle Night held by Protesters