Hit And Run Driver Crushed Woman To Death In Anambra

The menace of the hit and run drivers are getting rampant in Nigeria, and its high time the federal government intervene by formulating a drastic action against such drivers.

Many Nigerians have lost their lives to the reckless driving of these nefarious drivers, due to their lack of skills and carelessness in driving.

Just about five days ago, during the early part of Wednesday of on the 12th of August, 2020, a certain reckless hit and run driver, crushed a woman to death at Okpoko junction, Anambra state.

The driver whose identity remains uncertain knocked down the woman while crossing the road and absconded according to the report of the punch newspaper of on the 11th of August, 2020.

According to an eyewitness, who spoke on the condition of anonymity said: The vehicle was on top speed and the driver fled after knocking the woman down”.

It was gathered that the victim dies after much effort to rush the woman to Toronto Hospital, Onitsha, by her parent.

Similarly, another crash occurred around 8.20 am on the same Wednesday in Ihiala, near Onitsha. 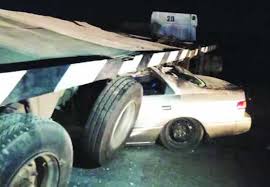 The menace of the hit and run drivers in Nigeria are grievous and Nigeria government must be wary about what to do in time.

There are so many things that may lead to a highway accident which we all knows but the issue of reckless driving should not be overlooked, most drivers are committing the crime due to their egoism for money, they tend to rush to destinations so as to rush back to convey more passengers and goods to places, in this way they end up killing humans.

In this regards, the Nigeria government should not allow anyone to go scot-free again, whoever that is guilty of killing a fellow human should be arrested and incarcerated without trial.

What is your contribution to this story?

Frank Lampard has expressed his love for former team-mate Branislav Ivanovic and has explained why the Serbian had such a long and successful career....
Read more
- Advertisement -
Celebrity

Yinka Rythmz Reveal His Biggest Project Ever In an Exclusive Interview

Boko Haram jihadist has struck again at the convoy of the Borno state government killing more than five security officials.
READ ALSO :  The Evil That Nigerians Do But Blamed It On Government
The convoy was conveying...
Read more

APC governorship candidate in 2019 Bayo Adelabu had once again thrown a jibe at the current and incumbent governor of Oyo state Seyi Makinde...
Read more
News

Imo state government have reached the conclusion to place a ban on all taskforce operating in the state. The decision which was reached by...
Read more
News

There had been a series of clamour from the Eastern part of Nigeria since the beginning of our dear country, Nigeria. Most of the agitations...
Read more
- Advertisement -
Subscribe
Login
Comments
Inline Feedbacks
View all comments
© 2020 | 50Minds Reporter | All rights reserved
wpDiscuz
0
0
Would love your thoughts, please comment.x
()
x
| Reply
Go to mobile version