There was confusion in Enugu, as the news broke out that Engr. Sonna Okoma, the Son of the owner of a popular Civil Engineering Firm situated at Uwani area of the state escaped the cold grip of Fulani herdsmen at Ugwuoba Gariki, a town close to Awka in Anambra State, known to harbor cow traders in the state. 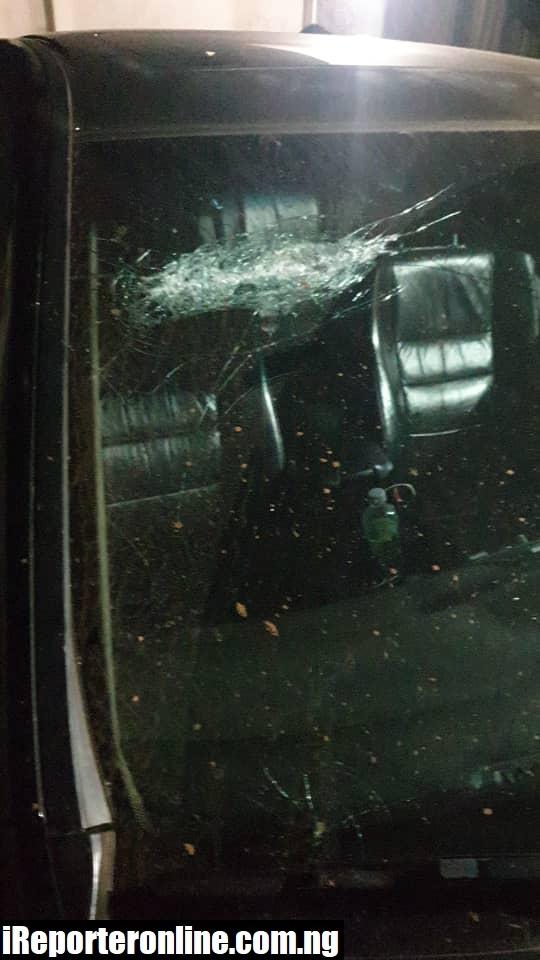 The incident which occurred along the Awka, Enugu expressway, in Engr Sonna’s 2008 model black Honda with registration number KJA437FD, was roundly condemned by commuters and the people of Anambra and Enugu people who saw the vehicle and those that heard the young Engr Sonna’s account.
According to the father, Okoma junior, whom he said was highly traumatized and could not speak to the press said, his son, was on his way back to Enugu at about 4:30 pm, when suddenly some Fulani herdsmen appeared with Ak47 and started firing at their car.
They used their cows to block the middle of the road to slow vehicles down before their assault. Luckily for the young Okoma, with three of his colleagues, in the middle of the confusion as a result of the gunshots crashed into a nearby ditch and escaped for their lives , and abandoned their car.

Speaking to National Detective Magazine, Engr Okoma said, “My son was attacked this evening by the Fulani herdsmen immediately after Ugwuoba Gariki” he narrated how the herdsmen Killers opened fire on his Son, how they crashed and escaped. He thanked God for sparing their lives and facilitating their escape. He described the attack as , “sudden, and very frightful”. The Enugu based Engr, said, “it is unexpected that such an incident could occur under the “safe noon, a broad daylight ”? Engr Okoma expressed shock at how the herders have turned their haven, the cow market vicinities into terror point, where they inhabit to do their business, an operational Kidnapping point, by engaging in such a dastardly act. “ It is unfortunate that they have been using this system to kill innocent people along the Anambra, Enugu road around the Ugwuoba axis to carry out this nefarious act,” he said.
Okoma whose eldest son and four others were involved further opened up on how the young men were traumatized saying that he hoped that this will serve as a wake-up call to all those plying the road to be very vigilant while driving through Ugwuoba Gariki and prayed that the leaders of the Ugwuoba community around the Gariki area could alert the state command of the police and the state government to reverse the trend of this brutality by the herdsmen.
Okoma who was at his Enugu office, at the time of the incident, said his son’s life was shielded by God, questioning, why the herdsmen should have the effrontery to be opening fire at innocent harmless travellers.
“The herders simply think their access to guns and incessant attacks on those in transit can hinder the use of the road. As a family, we will continue to praise God, pray for the safety of other road users and pray for God’s intervention over this ugly trend of Happy trigger herdsmen, I call on the Governors of Enugu and Anambra and the Inspector General of Police to urgently intervene to save lives of commuters and possibly avert a restive situation in that area of the state.
“As a Christian, my family has resolved to remain thankful to God and leave everything in the hands of Almighty God. Indeed I have received a good number of calls, messages and visits by concerned friends, in-laws, classmates, just across the board, since the news of the incident on the evening of 31st August 2021. Engr Okoma stated.

Mike Tyson and the Flawed Allure of Authorized Biopics

Dalton Haas was arrested for allegations of signing a fraudulent check, Theft Charges

#BBNaija: Reactions as Bella and Sheggz Engage In ‘Passionate’ Act Under The Duvet (Video)

Who Is Alisa Diomin? All About Golfer Wiki Bio Net Worth Instagram Explored